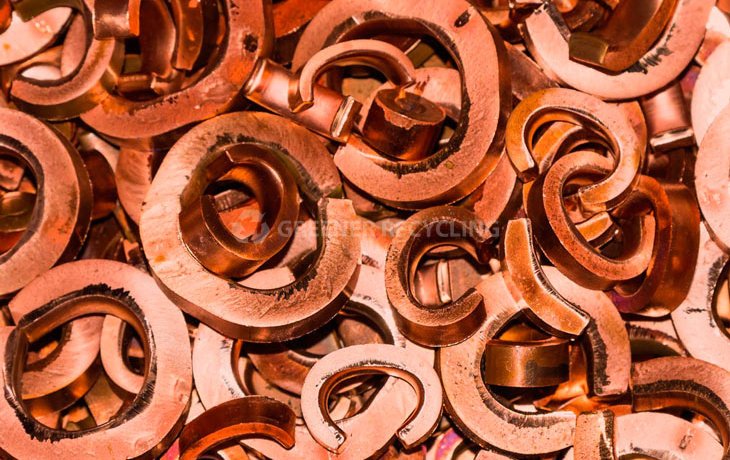 Copper has been stagnant.

Metals on a whole have seen demand rise in the world. But Goldman Sachs is predicting an increase in supply that will hit the market right as China, the world’s largest consumer of copper, is seeing a slowdown in demand.

Inventories of copper continue to accumulate, offering more clues to the global slowdown. The London Metal Exchange has seen stockpiles rise to a 10-month high. Commerzbank AG said in an August 24th report that supplies moving into warehouses are assumed to be coming from China. The growing inventories are seen as the reason why investors are anticipating further declines in price. “Investors just aren’t considering to push their longs in copper,” said Bob Minter, a money manager from an Asset Management firm, based out of Philadelphia, which oversees $402 billion. As demand continues to decrease, “The time of the year is also working against copper, as the last half of the year, is usually a tough time for many of the industrial commodities.” 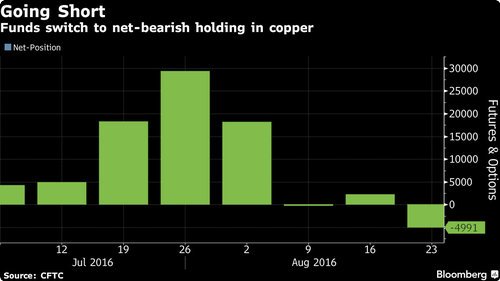 Big-time speculators and investment firms have been betting on declines in price, as of August 23rd, there were 4,991 US copper futures and options contracts holding a net-short position. This was according to Commodity Futures Trading Commission data released August 26th. A week earlier there were of 2,237 wagers on copper up surging, or on a net-long position.

Futures traded on the Comex in New York rose as high as 0.3 percent Monday and traded from $2.0870 a pound in Singapore to $2.0845 a pound on Friday, after falling more than 4% a week earlier. Overall prices are down 2.2 percent this year.

Dane Davis, an analyst at a British multinational firm, predicts copper will fall below $2.00 by the end of 2016. “The second half of the year will be difficult, partly due to China’s front-loaded economic stimulus efficacy starting to fade.” She said

In July, China’s imports decreased to the lowest in 17 months, while exports were 5 times higher than the same time the previous year, according to customs data. Commerzbank remarked that copper was likely leaving China at a comparable rate in August, based on the rise in stockpiles. 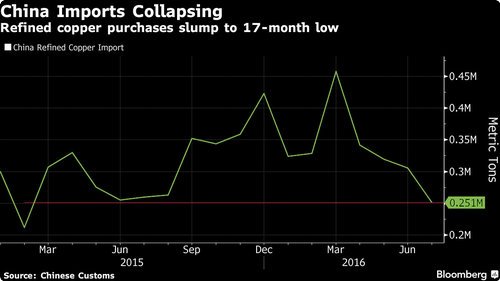 Supplies are set to increase as demand shrinks. According to an August 4th report by Jeff Curie, the companies Goldman Sachs track had expanded 5% in the first half of the year, and those companies make up around 60% of the global mine supply. Analysts are saying that production will rise as much as 15% in the coming months, signaling that copper is entering what some are calling a ‘supply storm’.

Not everyone agrees with these predictions. According to Citigroup Inc., the growth in mine production earlier this year was due to a 52% increase in Peruvian production, and that they expected that growth to slow down in the second half. Analysts, including David Wilson, wrote in an August 16th report that the 1 million metric tons of increased supply expected by 2020, won’t be able to meet the growth of 1.6 million tons in demand.

While China’s demand slows, the need for copper is expected to increase elsewhere. In Japan, the government plans to spend 6.2 trillion yen, or $61 billion, on infrastructure. Meanwhile the US, the second highest consumer of copper, has two presidential candidates pledging to increase spending on infrastructure.

“Copper is key in building infrastructure, if these countries do start repairing infrastructure, it would surely increase demand.” Said John Kinsey, an investment manager at Caldwell Securities Ltd that oversees $769 million in assets. “There could be a shortage initially, with closures of uneconomic mines. Then of course supply will return, leading to an overabundance, and the cycle starts over again.”